It’s the middle of March already and winter is finally showing some signs of ending. Because of the winter and because of school work, I haven’t done much traveling since my last post. However, over the last few weeks I did go skiing a couple of times, and took some beginner’s lessons with some friends. Here in the Northeast there isn’t much else to do in winter other than skiing or snowboarding. I got my first taste of skiing a year ago, and I wanted to get better at it instead of falling all over the place. There were plenty of skiing hills not far away from my location, and some of them were very reasonable in terms of pricing. I also joined the school ski club which offered much lower rates on equipment rentals. We had three lessons, and they definitely helped. I was able to ski down from the top of a mountain (a small one) through a blue trail and not fall in the process. Of course, I was skiing quite slowly, but it was a significant improvement compared to before the lessons. 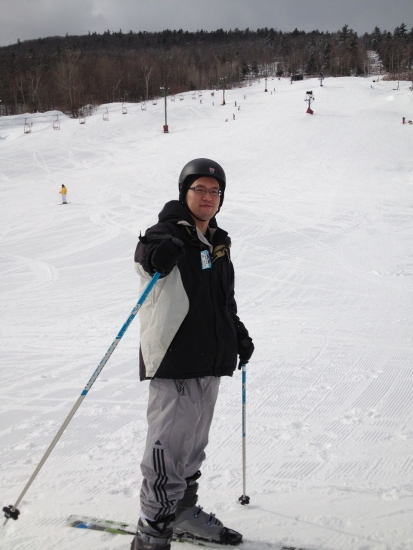 At this point, I think I’m fine on green trails, but I might still take a tumble on the steeper sections of blue trails. Skiing is all about making the turns and using that to control speed, and I still need to improve in my turns in order to handle the more difficult trails with more consistency. Falling does hurt, and I got pretty sore, but overall I think skiing is a very fun activity. It’s very late in the ski season and I don’t know if I’ll go again this season, but I’ll be sure to head back to the hills next winter.